Music is a part of my life. I play no instruments. I’m not a trained musician. But, music is in my heart, and in every cell of my body. That’s why chanting (bhakti yoga or kirtan) is one of the most important aspects of yoga for me. Yes, chanting is yoga. As is dancing.

When I was a kid, I felt something special when I would sing with my sister. After seeing “The Sound of Music” and “Mary Poppins,” some of the songs were on automatic replay in my head. I couldn’t stop singing. Now, it’s the same way. But it’s mantras that keep circulating through my heart and my mind. I try to share that appreciation with my students. In classes, even if I’m playing Mary J. Blige or Stephen Marley, I’ll intersperse a rhythmic mantra.

Once or twice a year, I go to kirtan festivals. Recently, I was in California for Bhakti Fest. The following weekend I went to North Carolina for Sadhu Sanga. Both were gatherings of several thousand bhaktas. People, like me, that have been touched by the power of sankirtana (group chanting).

One of the most beautiful things about Bhakti Fest and Sadhu Sanga is the energy. Beyond the beautiful sounds and rhythms, there is a special atmosphere. Bliss. Devotion. Whatever you want to call it. That’s what bhakti is all about. In fact, one of the translations for bhakti is devotion. When you practice san kirtan that special feeling is magnified a thousand times.

Now, there’s a kirtan festival in Texas.  Labor Day weekend. September 2 to September 4.  The venue is the most beautiful ISKCON temple.

Kirtan Fest Houston brings together kirtan artists who travel around the world. Karnamrita Das is one. I’ve sung with her in California. Amala Kirtan Das is a Brazilian-born musician with whom I’ve chanted several times in Austin. In addition to many others leading the group chanting will be San Antonio’s Advaita Acharya Das. He’s my personal conductor. He’s moved my life in many ways. Not just getting me to dance or sing, but to make a difference in my life. To live the principles of yoga.

This is your chance to feel the power of group chanting without leaving the big state of Texas. In fact, Advaita is coordinating caravans to get to and from Houston.

Advaita quotes the scriptures to explain the value of chanting.

1) Get as close to the kirtan circle as possible. Imagine fire. The closer you are, the more wholesome is the experience.
2) Don’t burn yourself.  Respect the fire. Respect kirtan sound and you will be able to feel something without touching it, and see something with your eyes closed.
3) Don’t come to kirtan tired. Don’t over eat, or eat not enough.
4) Remember your body is a temple. Focus on PPP:  Posture. Pronunciation. Presence.

Girish is one of the frequent Bhakti Fest musicians. At this year’s Shakti Fest I attended one of his workshops. Kind of like Singing 101.

“Every one of us is born to sing,” he said. “Each and every one of our bodies is a unique musical instrument. Are we a cello, or are we a flute, or trombone in this symphony of life?”

Girish pointed to research that validates what I learned as a young kid. Singing feels good.

“It’s scientifically proven that singing is really really good for us. Singers have lower cortisol levels, by about 15 percent. It activates the parasympathetic system. It lowers our blood pressure and calms our mind.”

And, especially when we do so with groups of people (sankirtana). Think about singing at places of worship, or jamming with your friends or family. What’s more, Girish says when you sing in sanga (community of likeminded people), “Our heart beats and brain waves sync up.”

Girish said that freeing the voice is freeing the person. Moreover, “Our voice is a bridge between the inner world and the outer world. Singing and chanting is the best way to bring that forth. It’s not about having an amazing voice. I myself identify as a drummer who sings. Live your life so that when you die, the world cries.”

Girish told us that the word voice is related to the word invocation. Both come from the Latin  vox.  dictionary.com defines invocation as the act of invoking or calling upon a deity, spirit, etc., for aid, protection, inspiration, or the like; supplication. Another definition is a form of prayer invoking God’s presence, especially one said at the beginning of a religious service or public ceremony. So, that can be interpreted as chanting is a form of invoking that connects one with a higher spirit. 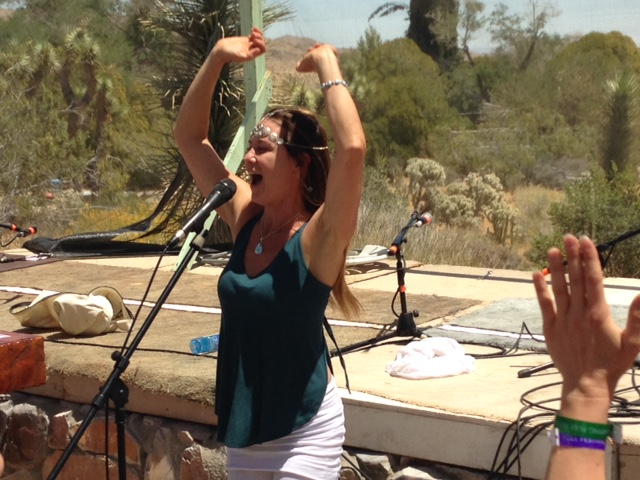 Girish first explored devotional singing when he was in college. There,  he found Kundalini yoga. Then, he deepened his chanting practice when he lived as a monk for five years. He studied Sanskrit and translated many mantras.   Translations are hard, especially from Sanskrit, because there are so many interpretations. About “Om Nama Shivaya,” one of my  ingrained mantras, he makes it simple.  “I honor the inner Self. Shiva. The light of consciousness within me.”

Jaya Lakshmi acknowledged that Kundalini yoga was the gateway for her devotion. Not surprising, since mantra meditation is very much a part of the Kundalini tradition. Additionally, she said “mantras have such potency.”

“The best mantra to practice is the one you are going to practice. You have to find the joy in it. For me, the Lakshmi mantra is the one I go to. We go through different phases. Whatever makes you a better person. The way is your intuition…your heart.”

One of my favorite recordings of Jaya Lakshmi and Ananda is “Divine Lover’s Maha Mantra.” The maha mantra is widely celebrated. It’s always the grand finale at Bhakti Fest and is the mainstay at Sadhu Sanga and the upcoming festival in Houston. Advaita leads it throughout San Antonio, and beyond. He explains that “maha means great… great mantra for upliftment and restoration of our original loving nature that will swell in your heart more and more, the more you chant.”

This site uses Akismet to reduce spam. Learn how your comment data is processed.